to Dartford Lock for a long time  –  certainly since the low bridge was built at Bob Dunn Way, and probably a good few years before that.

On Thursday of this week, 21st December, history was made when sb Decima made the journey along the creek, seemed to pass easily under the bridge and reached the lock.

Yes it seemed easy, but it followed a great deal of measuring and calculating to ensure she would fit under the bridge.

Gravesham councillor Conrad Broadley said,  “We really take our hat off to the adventurous owner and skipper David Leal and Colin Robson respectively for having the bravery to make what is quite an epic journey into the unknown paving the way for future nautical visitors to the historic moorings at Dartford.”

The intention is that Decima will be open to the public on some days.

Here’s the link to the Gravesend Reporter story.     Photographs below are courtesy of Conrad Broadley.

Below is Conrad Broadley’s video of Decima passing under the low bridge, and there are a series of short videos of her negotiating the silted up creek and narrow entrance to the lock.   Here’s one of them.

I’m very sorry there have been no posts on The Barge Blog since August.   September, October and most of November are my busiest months in “real life” and I just don’t have the time to deal with it, although I do manage the occasional post to the Society’s Facebook page.

Members of the Society should now have received the autumn edition of our excellent magazine Mainsheet  –  and if you aren’t a member and don’t have Mainsheet then you’re really missing something.   Mainsheet contained the news that Hugh Perks has stood down from the Committee of SSBR. 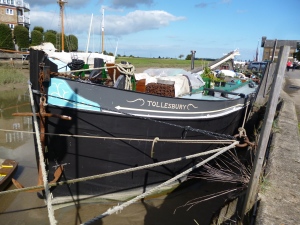 We are all very sad that he has come to this decision, although we understand his reasons.   Hugh is a founder member of the Society, has held office and has brought his vast knowledge of maritime subjects to our deliberations and indeed to our publications.

Thankfully, Hugh has said that he intends to continue to bombard us with letters, notes, corrections, etc, to keep the Committee on its toes.   And as good as his word, he has sent us this splendid photograph of sb Tollesbury.   He says:- “Tollesbury is now based at Standard Quay, Faversham, as her former berth at Barking is no longer available. She is looking very smart and well painted up.   Her mast and topmast need attention, but the sprit is newly painted.   The foliage in pots on the decks and hatches surely qualifies her for the “Valdora Trophy”.   Old timers may remember Valdora the ‘flowerpot’ barge at Great Yarmouth in the early 1950s.

“Also at Standard Quay is sb Decima, sporting somewhat virulent green paint in places, and sb Repertor is berthed opposite. “

A new chapter for Decima?

News today that sb Decima is up for sale.   The Apollo Duck website has an advertisement from MJLewis Boatsales of Maldon offering the 1899-built Thames sailing barge for sale at £160,000. 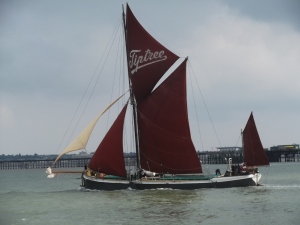 Decima was built by FG Fay & Co of Southampton, being one of twenty identical steel barges built by the company for EJ Goldsmith’s of Grays, who traded her until the late 1940s.   The 67 ton, 85 foot barge’s history includes ownership by Rayfields of Gravesend, and then Greenhithe Lighterage as a motor barge.

She was sold out of trade to Dennis Wildish in 1977 and he re-rigged her as a charter barge. In 1999 she was sold to Jeremy Taunton as a houseboat.

Master shipwright and well-known sailing barge restorer Tim Goldsack, her present owner, bought Decima in 2003 and started a major restoration.   She was gutted and a substantial number of the hull and deck plates were replaced. She was given a new set of rigging and good second-hand sails.   A new Gardner 6LXB engine was fitted.   Decima has three cabins, with six berths, and central heating was installed when her owner lived aboard her for two years.

In July 2004 Decima set her sails for the first time in over 15 years, and has since been seen regularly around the East coast.   She has recently been based at Heybridge Basin, and in 2010 Wilkin and Son Ltd of Tiptree, Essex, (the famous makers of jams, marmalades, and conserves), became her sponsors.   Consequently the Tiptree logo has been displayed in her topsail.

Thanks to the Decima website for the following interesting titbits from her history:-

“Things have not always run smoothly for Decima.   She has had many mishaps in her long history.   Most notably in 1938, during a severe gale, her crew abandoned her off Great Yarmouth, and she sailed herself across the North Sea to Holland!   She was relatively unscathed, and was returned to England where she was repaired and returned to work.   On November 17th 1940 she was swamped and sank whilst at anchor off Southend pier with a deck cargo of timber.   She was re-floated, refitted, and once again was put back to work!”

The general opinion seems to be that this year’s Swale Match, 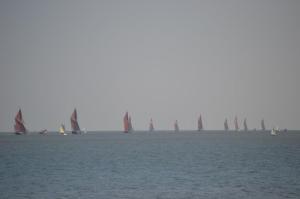 held last Saturday, was the best race of the season.   And it had a “newcomer” in that Niagara took part, less than a week after she returned to the active barge fleet.

“The Match started in light airs east, soon getting up SE and just up to Force 6 for the run home.

Cabby made the fastest start, 20 seconds after the gun.  There were some thrilling finishes. 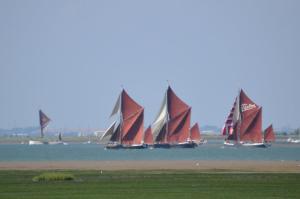 Mirosa and Marjorie taking it right down to the wire

In the bowsprit class Mirosa beat Marjorie by the tip of her bowsprit, (half a second between them).  3rd was Lady of the Lea, (the only other bowsprit barge), which incurred a 5 hour penalty for starting 15 minutes early with the staysail barges, and was banned from entering public houses for the next two years.

In the Staysail Class Niagara and Repertor were neck and neck at the finish, with Repertor one second ahead.  After a protest on the matter of something earlier in the match, Repertor was given a 5 minute time penalty, giving Niagara the victory.   Decima was 3rd, getting the Percy Wildish Cup which was fittingly presented by “Beefy” Wildish’s son. 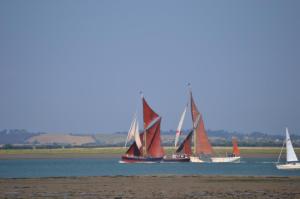 Repertor and Niagara fighting for the line

Restricted Staysails went to Cabby, (in spite of also incurring a time penalty).  There was a close finish for 2nd place between Phoenician and Orinoco, (27 seconds), but it was given to Orinoco as Phoenician had failed to go round one of the marks.   3rd was Greta and 4th Pudge.

The fastest smack was Alberta, but on handicap went to Emeline.

Around 70 vessels took part in the match.”