Diana Farmer‎ posted this great picture on Facebook today.   It shows her grandfather (Fred Scales), her dad Bill (William Scales), and herself looking at the sb Kardomah after gales in 1961.   It appeared in the local newspaper (the Essex County Standard). 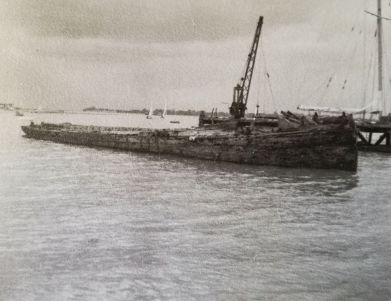 Kardomah was built at Rochester by Gill & Sons in 1907.    Her owners included Charles Tuff, Samuel West and the War Department. She was hulked in 1947 in front of the Custom House, Brightlingsea. All trace of her had gone by 2005.

Here’s a sad picture of her taken by John and Lena Horner in the late 1960s.

Tomorrow sees the Doggett’s Coat & Badge Race rowed on the Thames in London.   The Race starts at 11.30am at London Bridge and finishes at Cadogan Pier, Chelsea.   The prize-giving will be at Fishmongers’ Hall at approximately 1.15pm.  And this year, it’s an important one  –  the 300th Race.

And here’s a report in 1915, which says that as “one of the minor hardships of the war” the Race will not take place.